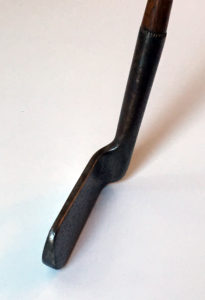 Tom Stewart was arguably one of the most famous hickory cleek-makers of the world. He produced millions of iron club heads (he only made heads, not complete clubs) from 1893 to 1932. His eye for perfection was legendary. As a result, many of the world’s best players used Stewart irons (Old Tom, Bobby Jones, Francis Ouimet and many others).

This putter model was one of Tom’s first product lines, and was known as the “Accurate” putter. In this instance, the shaft carries a James Winton stamp marking (Montrose). James was the earliest of the Winton clubmakers/sellers – his brother, William, later went into business with him. According to a similar set of putters in Ralph Livingston’s book (page 202), this is likely one of the earliest models of clubs made and marketed by Stewart.

[James Winton (1835-1907) was a golf professional and clubmaker of note in Montrose. Clubs made by him are prized by collectors. Winton made several clubs for Willie Park, winner of the first major championship in golf history, the Open Championship of 1860. Park won the Open three more times, the last in 1875. He also played often at Montrose courses, as did his son, Willie Park Jr. (1864-1925), who would win the Open Championship in 1887 and 1889.]

A 1901 article (see below) included this line: “But Mr. Stewart is not only a maker of cleeks, he has invented several things which have all taken well and are in general use. The two best-known, perhaps, are – the “Perfect Hole Tin” now used at St. Andrews and at about 200 other greens scattered all over the world: the value of this invention will be at once apparent to all who see it, and it needs no description: and the “Accurate Putter” with the bent shank, which has been adopted by many leading golfers both professional and amateur.”

Of all the old Scottish cleek makers who worked during the wood shaft era, Stewart was the most respected in his day and is the best known today. 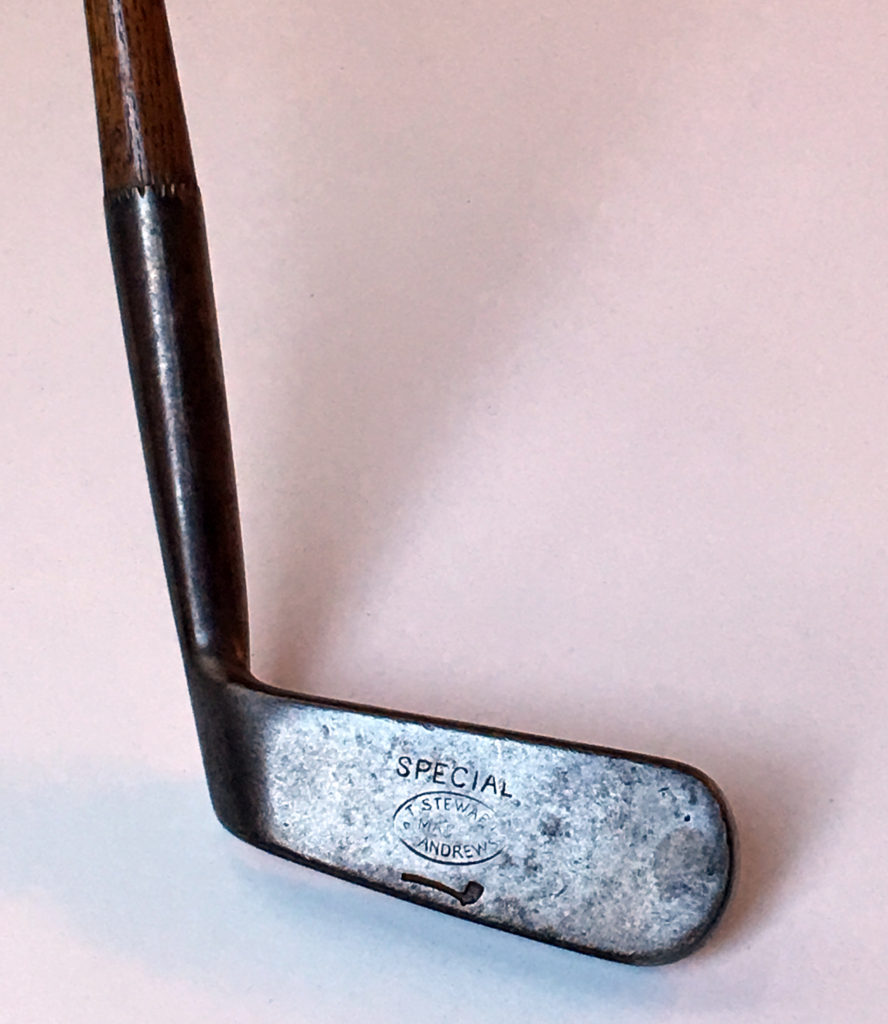 In the early days, his best customer was the shop of Old Tom Morris. Old Tom, himself, played with irons made by Stewart.  In the 19th century, Stewart also made heads for the McEwans in Musselburgh, as well as D. & W. Auchterlonie and Robert Forgan in St. Andrews.

Many of the great players of the 20th century came to Stewart to forge an iron to fit a specific need.  Stewart capitalized on the success of these clubs, by producing copies of a player’s original. Some of the more notable copies include the James Braid iron, the Vardon mashie, the Sandy Herd iron, and the cleek used by Freddie Tait. 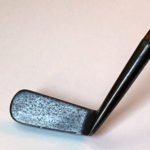 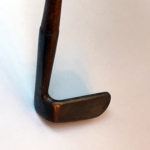 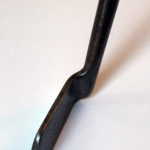 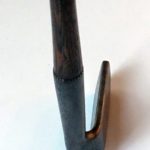 The legendary American amateur, Bobby Jones, greatly admired Stewart’s workmanship and used many Stewart irons during his career. In 1931, following Jones’s Grand Slam victories, Stewart introduced his R.T.J. model irons although he did not have Jones’ permission.

Stewart preferred making copies of high-performing clubs rather than unique clubs for every golfer. For example, Stewart only patented one club, a putter with top and bottom flanges which gave the back a hollowed out effect behind the sweet spot.

Stewart clubs are recognized by his famous cleek mark, the clay pipe, which he first used in 1893. He registered the cleek mark as a trademark in 1905, so all clubs made from that time have small lettering under the pipe designating the trade mark status. He also used a cleek mark of a serpent on ladies and children’s clubs. 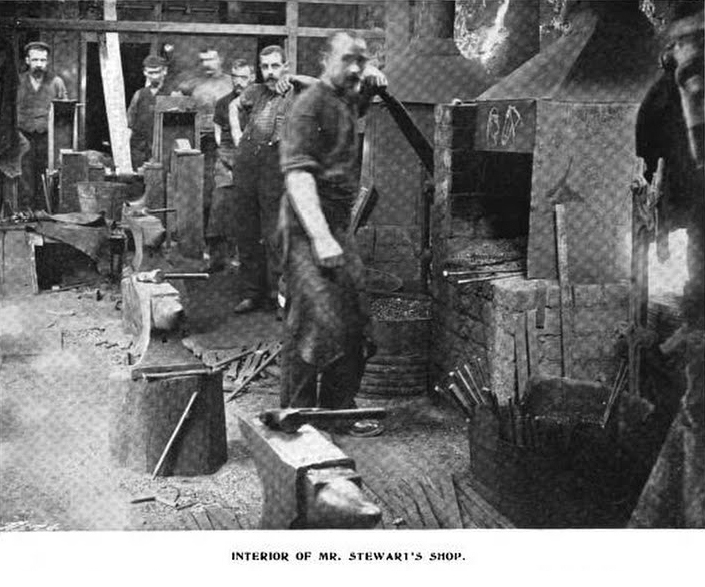 He served an apprenticeship with Robert White and started in business on his own in the mid-1890s in Market Street, St. Andrews, but also took over premises in The Pends where Robert White had his business. For quite some time irons were forged in The Pends then taken across to Market Street for finishing. St. Andrews is not huge but that could not continue as the business expanded so he took premises in Greyfriars Gardens before moving to the address in Argyle Street where the business remained until his death and beyond.

In addition to his clubs his patented iron hole liners and cups were used on the Old Course at St. Andrews.

He retired around 1930, his business carried on by his sons, Thomas, John and Malcolm and he died in 1931. His obituary in the Dundee evening paper claims he was the first man to make a matched set of clubs.

Mr. Thomas Stewart, Golf Cleek and Iron Maker, St. Andrews, may be said to have been born to the trade. He hailed originally from Carnoustie, where his father followed the same occupation and some forty or fifty years ago made cleek heads for George Morris – brother of the veteran Tom – who was then located there.

Mr. Stewart served his apprenticeship as a blacksmith and worked at this for some years before taking to cleek making. His strong point was horseshoeing, for which he was successful in winning prizes at many of the local Agricultural shows. About eleven years ago he went into the workshop of Robert White, the well-known cleek maker of St. Andrews now in America. He worked for White for about three years, after which he began business for himself.

He has now eight men in constant employment, and his cleek and iron heads, with the pipe on the back as trade mark, are well-known in the golfing world and find favor wherever they go. The idea of a pipe as a trademark is not a new one, as it served his father before him.

But Mr. Stewart is not only a maker of cleeks, he has invented several things which have all taken well and are in general use. The two best-known, perhaps, are – the “Perfect Hole Tin” now used at St. Andrews and at about 200 other greens scattered all over the world: the value of this invention will be at once apparent to all who see it, and it needs no description: and the “Accurate Putter” with the bent shank, which has been adopted by many leading golfers both professional and amateur.

Mr. Stewart uses in his workshop one of Crossleys Gas Engines.

He does not limit himself to iron club heads, but also turns out besides the Hole Tin (his invention), flags, hole-cutters, ball presses and ball molds; in short, everything connected with Golf.

Since he began his business, eight years ago, Mr. Stewart has never had an accident among his employees, a fact which speaks volumes for the care exercised in his business. 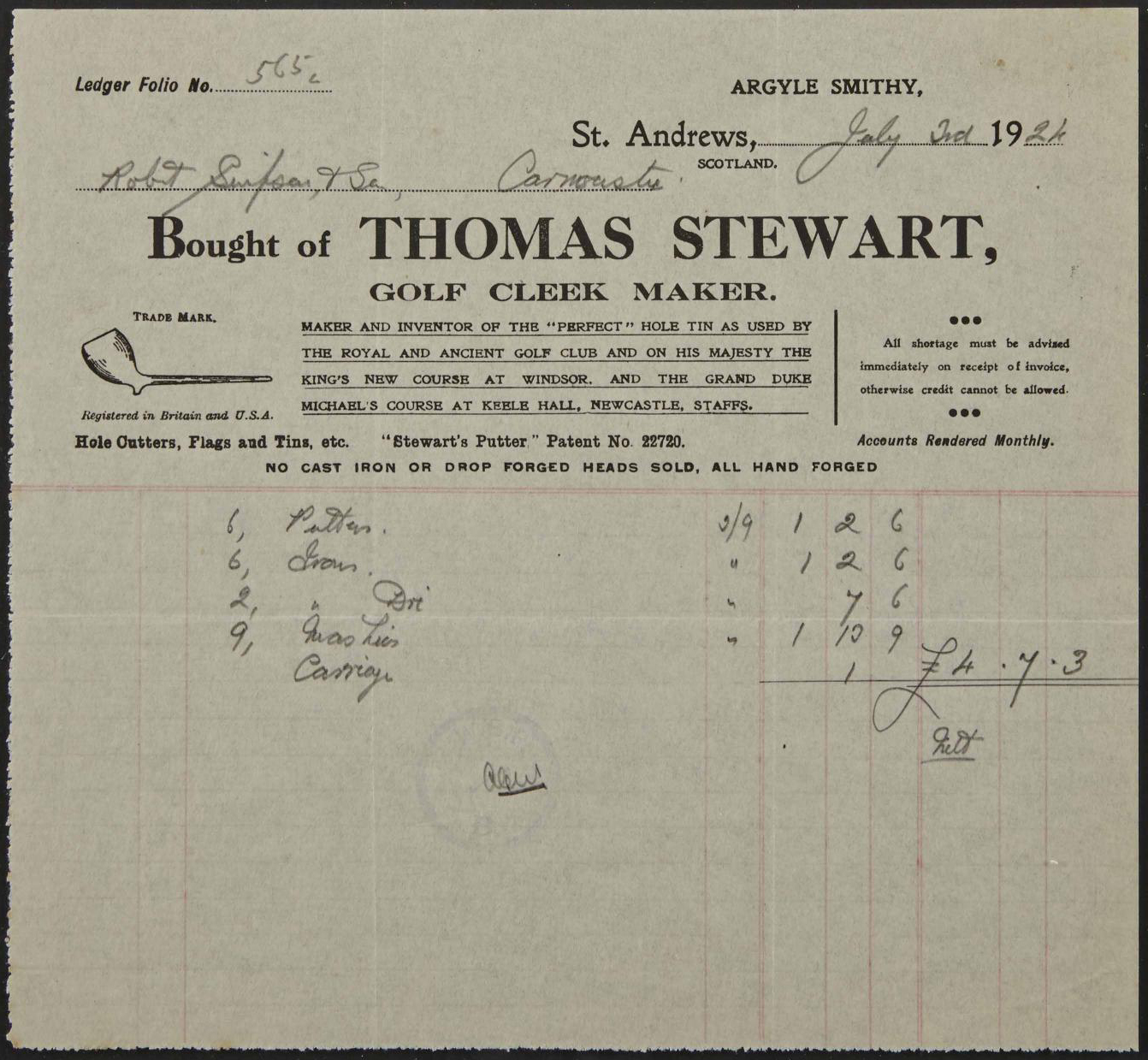 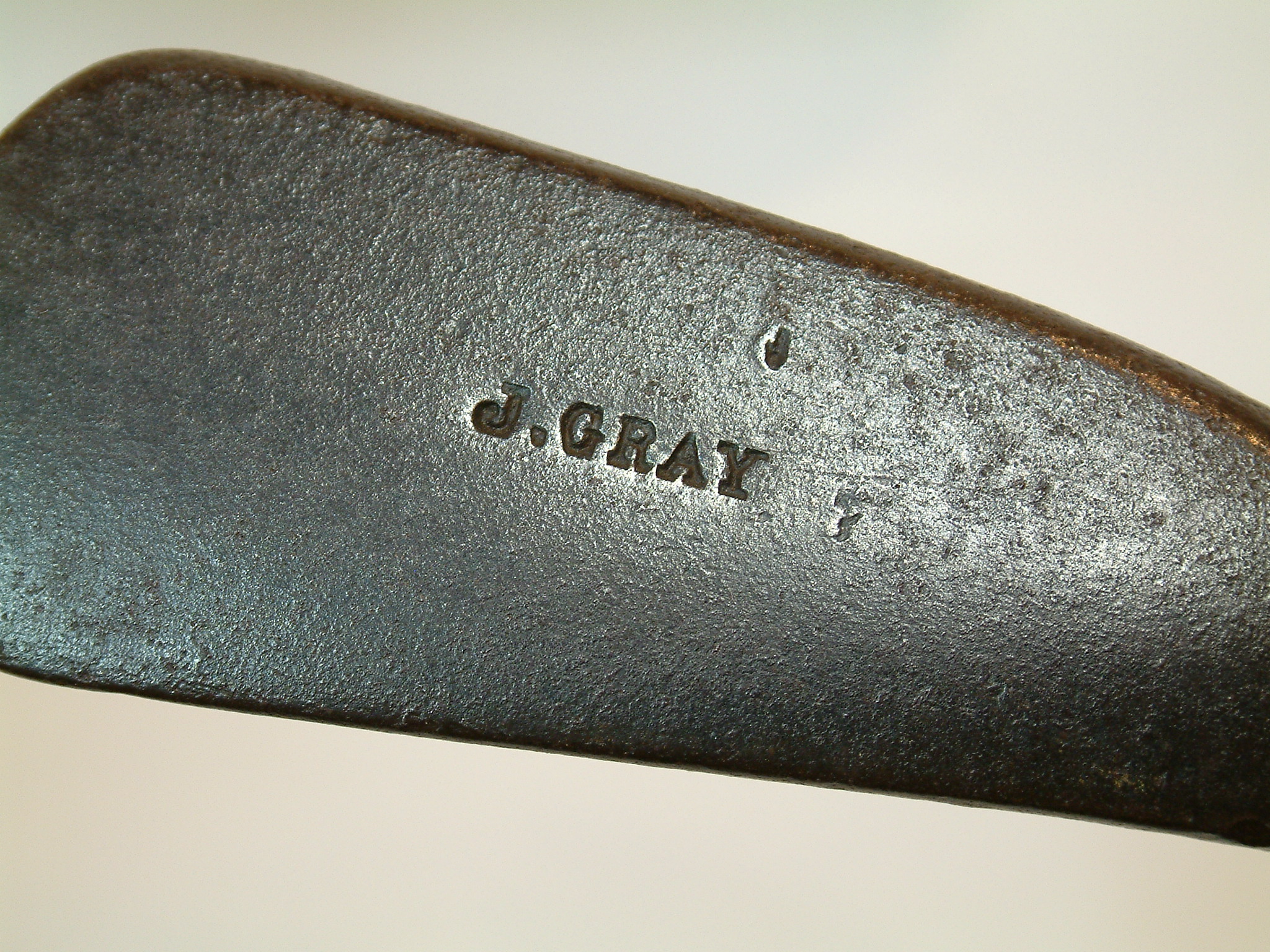 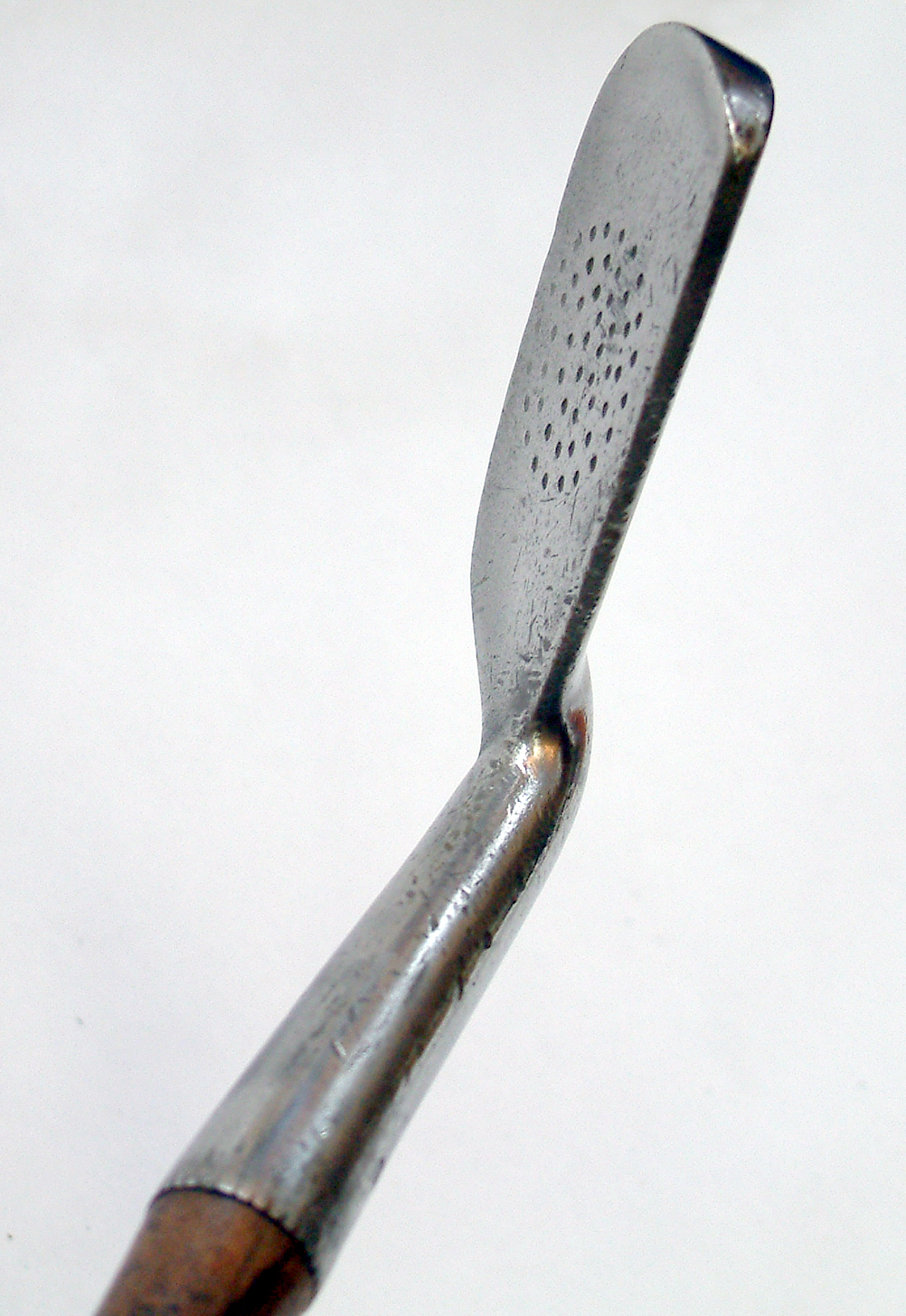 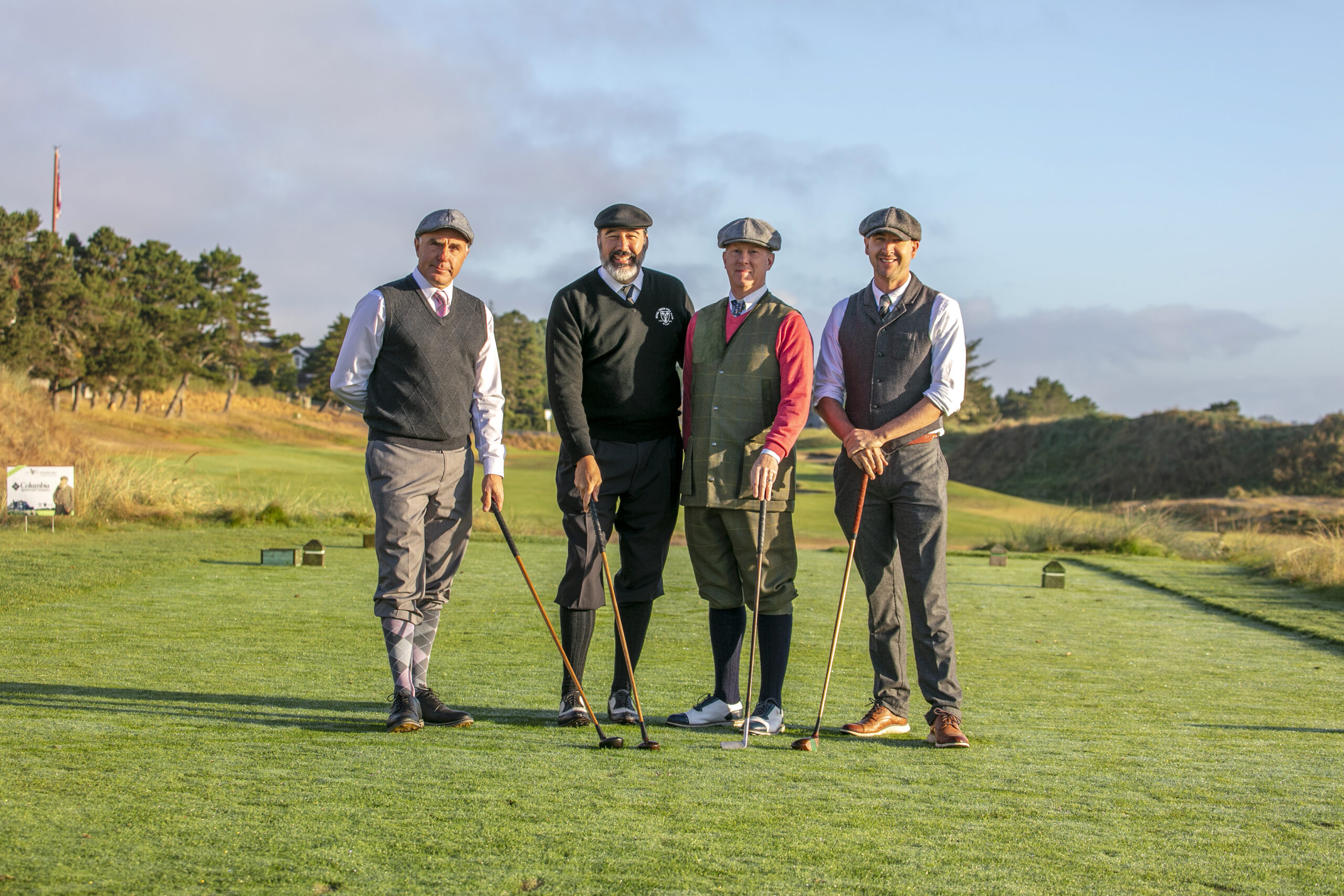